A Life in Pictures and Words

Simon Magus through the centuries as depicted in art. The following images are listed chronologically. 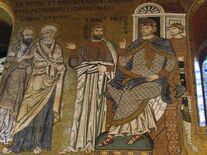 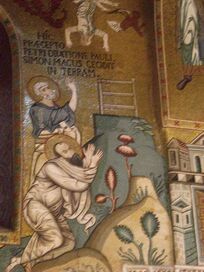 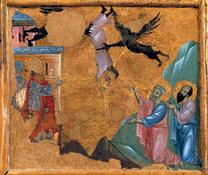 1280 painting by an Italian known only as the Master of St. Peter, from the Church of San Pietro in Banchi, in Siena, Italy 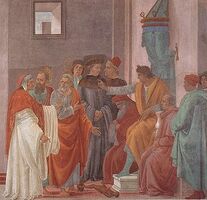 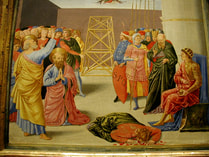 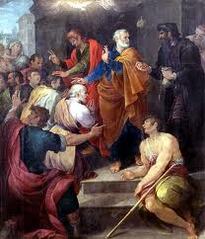 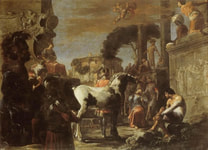 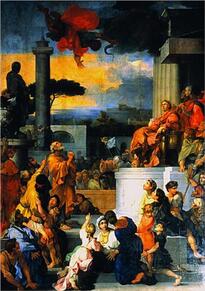 Marker commemorating the fall of Simon Magus. 1893.
​
The above pictures are, to the best of my ability and tenaciousness, the only artistic depictions of Simon Magus I could find on the internet. Although Simon Magus is mentioned in the Bible, the following Church Fathers give more details than does Holy Writ.
​
​We are immediately struck by the overwhelming representation of the Italians in our unscientific survey. It seems as though there is a disconnect between the vast literature of Simon Magus and his representation in art.  It seems as though the artists only knew of the dispute between Simon Magus and Saint Peter and the fall of Simon in the Roman Plaza.  There are no depictions of the Biblical version of Simon Magus, possibly due, in no small part, to the lack of dramatic element of Simon flying and falling due to the intervention of Saint Peter. Interestingly, the Biblical account does not state that Simon Magus stopped believing, whereas the Gospels are clear that Simon Peter lost faith.

Clearly, few artists found the theme of the fall of Simon appealing, since so few depictions have come down to our time.  The demand for Crucifixions and Resurrections were foremost in demand, judging by the myriad of examples that we posses.  Although the marker found in Santa Francesca Romana is not a depiction of Simon Magus, I found it curious that a marker dates from only 1893.  Rome is well known as a tourist trap and that the church would not have "cashed in" on the infamy of Simon Magus sooner than the 19th century.

We presume that the depictions of Simon Magus may be limited, not because of what is recorded- Saint Peter defeats the heretic Simon Magus- but the implication of the story is that Simon had power and, if not for the intervention of saint Peter, he may no have fallen to his death.  This demonstration of heretical power being almost equal to the great power of God may have been too tempting to the simple believers and certain more introspective audience members.

i. Recognitiones, 2. Homiliæ, of which the Greek originals are lost, and the Latin translation of Rufinus (born c.A.D. 345, died 410) alone remains to us. The originals are placed by conjecture somewhere about the beginning of the third century;
MS. eleventh century.

B. A mediæval account; (Constitutiones Sanctorum Apostolorum, VI. vii, viii, xvi); these were never heard of prior to 1546, when a Venetian, Carolus Capellus, printed an epitomized translation of them from an MS. found in Crete. They are hopelessly apocryphal.
​

We are tempted to say that the story of Simon Magus was not known until the late 15th century and that the literature referring to Simon Magus was found in libraries at about the same time as the execution of the paintings. While depictions of the Resurrection clearly demonstrate the lack of a Biblical understanding in the 15th century,  depictions of Simon Magus confirm our suspicions concerning the recent nature of the great Gnostic heretic being defeated at the hand of Roman Catholic Orthodoxy.

I have ignored the Palatine chapel mosaics.  In the first place, the text is in Latin, which was not the official language of the Roman Catholic church until the 16th century and, therefore, there was no reason in the 12th century to have the description in an alien language that was not Greek and, secondly, the artistry is noticeably more accomplished than icons of the same time.  For these two reasons I suspect the Palatine mosaics to be a forgery of the Renaissance.
Extra Biblical information on Simon Magus
Conclusion

CITATIONS FROM THE OXFORD ENGLISH DICTIONARY
​

Etymology:
< classical Latin magus (denoting a member of the Persian priestly class, and, more broadly, priests or wise men of other nations; in sense 1 after usage in the Vulgate and in Christian writers, and in sense 2b probably influenced by the epithet of Simon Magus, a magician in Samaria (Acts 8:9–24), regarded from Patristic times as a type of the anti-Christian exponent of magic arts)
< ancient Greek μάγος
< Old Persian maguš.

Occas. use of magi as singular is noted by usage guides from later 20th cent.

1. Chiefly with capital initial. the (three) Magi : the three ‘wise men’ (see wise man n. 3) or astrologers who came from the East, bearing gifts to the infant Jesus (Matthew 2:1–12); a representation of these.

2.a. A member of an ancient Persian priestly caste which became influential in the development of Zoroastrianism. Hence: a person skilled in eastern magic and astrology; a magician or sorcerer.

Originally members of a Median tribe or clan with responsibility for cultic ritual, the magi assumed an important official position with the unification of the Persian Empire in the 6th cent. b.c., adopting and adapting the spreading religion of Zoroastrianism. It is probable that during the Achaemenid period the magi became involved (in Babylon, a major administrative centre) in the magical practices and beliefs subsequently named after them, and in astrology.

1948   E. M. Butler Myth of Magus i. i. 15
... magia signified originally the religion, learning and occult practices of the Eastern magi.

1981   N. G. L. Hammond Alexander the Great 268
His readiness to turn to Greek and non-Greek gods alike for help is shown by his consulting not only Greek seers but also those of Egypt, Persia (the Magi), and Babylon (the Chaldaeans).

b. Any of the pagan magicians and sorcerers supposed to have opposed the Christian missions of Sts Patrick and Columba.

1887  A. Bellesheim Hist. Catholic Church Scotl. I. 72
Thereupon the Magi, or Druadh, bitterly reproached the parents for ...

3. gen. A person regarded as having great wisdom or powers likened to those of a magician.

1700   J. Tutchin Foreigners 8
Where are the Antient Sages of Renown? No Magi left, fit to advise the Crown?

1983   P. Ackroyd Last Test. Oscar Wilde 125,
​I was the magus who had provided the words to unlock the mystery of his soul.