When one examines the Arcana, ones learns that Great Occultists, great composers (Bach is the exception) and great men, generally, do not have the desire to be responsible for children. I am certain I am not the first person to comment on this oddity, but I will finally commit my conclusions on this topic.

It is striking that great men can not find (once again this is a general statement and there are exceptions) five minutes to continue their genetic line.  As a scientist, I find this is a tremendous loss to Humanity’s future.  As an Occultist, I view this tendency to not reproduce differently. Concerning great women, the time and effort involved is more involved and topic will not be address in this essay.

For the last 500 years of recorded history, these exceptional individuals continue to appear. Either that potential to greatestness is available in our common genetic heritage, then their appearances are a matter of accident or chance, or that potential is not genetic and then we must look for a “non scientific” explanation.

Although I am reluctance to delve into what is many times the mumbo jumbo of the mystics of spirit, I will keep the ideas and concepts as free of intellectual clutter as I am able. I premise that the desire to do or to accomplish is higher than the drive to have children-that great men do not value children per se, or having their own children, although they are fond of children, specifically, and humanity, generally.  Since we live through our children, these men seem to have forsaken the immortality of continuing their genes. We, as human beings, are driven to survive and reproduce, yet these men have intentionally chosen a different course. It appears that they have benefited humanity at the expense of their genetic line for no reason. I repeat-did they, the men of renown of old, not have an extra five minutes to spare for posterity? If their ability is purely genetic, we would predict that in the future, there will be fewer and fewer extraordinary people, but will that be the case?

If not all people have the genetic possibility of greatness, we must explore the reasons beyond genetics. This other approach involves the formerly occult concept of reincarnation whose origin is in Plato’s Republic, chapter 10. The wheel of fortune or fate turns and we are reborn-those few destined for greatness and the majority for mediocrity.  This idea of reincarnation would explain why individuals come on the world scene as happy accidents.  However, in invoking the new idea of the immortal soul, we begin our slide towards the influence of the mystics of Spirit.  If reincarnation is true, then nothing in this world or of the world has any value. The world would transform into a dunghill that has no value or worth.  By taking the spiritual route to explain isolated greatness, we are left without a standard of value and great accomplishments become illusions and shadows without substance.  I do not like this result for two reasons-we can not verity that people do, in fact possess immortal souls, Plato’s sham reasoning aside-and that greatness and mediocrity merge when one involves  speculation of a “spiritual” nature.  Therefore, we must end this line of inquiry and again approach this questions through genetics or the will to life.

Either all people possess this genetic makeup for greatness or only a select few possess these traits.  If all people have this potential, then one wonders the valid reasons why they do nothing with their natural talents. That inquiry, gentle reader, I will leave to those more capable of adequately addressing.  Therefore, we are left with the only possible solution to our question-only a few posses the genetic traits for greatness.

We will use Johann Bach as our reference for musical greatness and talent. Bach is chosen because of the number of children (20 known) and his life is well documented. Twenty progeny  is a reasonable number of progeny for the standing of Bach’s greatness.   We  assume that this number could easily be in the hundreds, if not thousands,  in the ancient world. These are acceptable numbers  before the advent of the modern convention of  marriage.

We  should we be surprised that greatness of mind and  fecundity should go hand in hand. As stated at the beginning of this paper, it seems that great men do not reproduce. This appearance of lack of desire for children may belie the fact that many men may have children and these children are not their responsibility to raise. We are expressly stating that great men reproduce in greater numbers than what is accepted by history and  infidelity was more common, if not commonplace, than is realized today.  Until the advent of genetic testing, nanny’s would comment that the baby has the father's eyes, nose et cetera, because we will always know the the mother, but we assume the husband is the father.  We will consider the following-Mozart was more cosmopolitan than Bach and he visited Paris and Italy as a young man and frequently traveled throughout the German speaking areas as an adult. Berlioz,Brahms and Verdi are the possible descendants of Mozart. This researcher would like to do genetic testing on Berlioz, Brahms and Verdi’s descendants to determine if there is a common genetic marker, but we know that great men tend not to reproduce. Using the descent from greatness as our standard, we conclude that Stalin and  Napoleon are descendants of Genghis Khan. The reader may deride my theoretical descents of Mozart, but Genghis Khan, according to accepted history, does not seem incredulous. Monet and De Nittis, we reasonably conclude, are descendants of Leonardo da Vinci.

The informed reader may question my designation of descendants for da Vinci due to his documented legal problem in Florence and because in various codices da Vinci wrote disparaging comments upon the act of procreation. To this reasonable objection, I offer the following-Would any woman attempt to name Leonardo as the father of her child? No, that would be pointless for her to attempt name Leo as the father and she would be ridiculed to no end, if not jailed for slander.  In Renaissance Italy, the mother would be more successful in gaining fame by stating she was visited by the Holy Spirit than by Leonardo. This researcher must conclude that great men have illegitimate children while avoiding responsibility by either hiding behind the farce of their “homosexuality” or the facade that they are too driven, too focused to have time for philandering.

This researcher wonders how many men, when informed that their wife was spending too much time with da Vinci, said “Oh, Leonardo he is a man’s man” or “Leonard is a fruit” or “Don’t you know about him?”.

We have before us two possible conclusion to the Kinderfrage-either reincarnation is an aspect of our reality or great men can’t keep it in their pants for more than five minutes. Unfortunately, gentle reader, we are left with no other viable options. 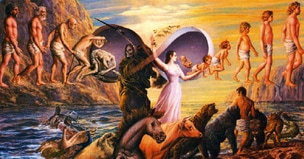