After enduring Master’s seemingly endless rants regarding Natural Law, I suggested that I write a paper that, in the spirit of Modernism, clearly elucidates the topic and ramifications of applying Natural Law to marriage. Master agreed with the condition that some esoteric writing must be present. I reluctantly consented.

Although Master believes Greek Mythology and the Roman Church were introduced in the 16th Century and Plato lived in the 15th Century, these philological theories have no bearing on our discussion and application of Natural Law.

One can have a saving account and a checking account at separate banks.  One can have insurance for car, home and life at three insurance companies..  In our example, this individual has entered into 5 separate contracts with 5 different parties.  All of these contracts are valid under Natural Law and State and Federal Law.  In this example, the laws of man and Natural Law are in agreement.  Continuing with our example, this person marries another person.  To state “another person”  is not extraneous, superfluous or poor writing.  For a contract to be valid, both  parties must consent and only people have the ability to reason and to consent.  Marriages are valid even if the terms of the contract are poorly understood, vague or not clearly defined.

One cannot enter into an agreement without consent.  A paw print or hoof print on a marriage license does not and cannot constitute a valid contract and, to the disappointment for zoophiles everywhere, one can not marry an animal. Once again, state law, federal law and Natural Law agree---consent is necessary for a contract to be valid. Unfortunately, State Law, Federal Law and natural law are not always in agreement.

Until 1966, some states attempted to limited the application of Natural Law to parties of the same race.  Today it would seem foolish for a white state bank not to open an account for a black customer, but one must remember that Natural Law is fundamental-there is no escaping it and no denying it-and with the Supreme Court ruling in 1966, state and Natural Law agreed that consenting parting should not be legally forbidden to marry.

This concludes our section on history.

Although certain Protestant denominations do not accept gay or same sex marriage, they can not look to Natural Law for their justification, but another source.  The Roman Catholic Church is also opposed to  gay marriage. But even with the plenitude of power held by the Vicar of Christ, even He can not change Natural Law.  As Master has previously stated, Natural Law will lead to  the Old Testament definition of marriage before the advent of Christianity, that is, polygamy.

In America, human law has arbitrarily set the age of consent at 18 years, that is, one can not get a car loan before attaining that age.  Of course, the age of consent for marriage varies by state.  We can see that any political attempt to limit Natural Law creates contradictions between state and federal Law.  There is no valid reason for a bank not to create a loan for a 14 year old to purchase an XBox, unless the person could not repay the loan.  In this case, denial of a loan would be justified.

Few Modern people would disagree that two teenagers  can engage in Natural Law as witnessed by teen pregnancy. In the few instances that consent is not given, Plato’s definition of “Justice is the interest of the stronger to the detriment of the weaker” applies.

When the Supreme Court rules in favor of Natural Law, the Polygamists will, as the saying goes, come out of the woodwork.  Eventually, the Supreme Court must rule that Polygamy is an acceptable application of Natural Law. After gay marriage and polygamous marriage, the age of consent will be the next barrier to fall, since it is a product of Human Law and, therefore, arbitrary and capricious.  The consent from a 19 year old and a 17 year old is not as shocking as the consent between a 25 year old and a 10 year old.

Unfortunately, Natural Law gives us no guidance on the age of consent, sexual or otherwise. Natural Law, in violation of national law, allows for conspiracy to commit murder, treason and sedition.  Natural Law makes no distinction between verbal and written contracts. The following shows the logical progression of the application of Natural Law:
Only a non thinking or non reasoning person could arrive at any other conclusion. This bold, new and innovative future of same sex, interracial, polygamous and pedophilic marriage is a certainty in our Modern society by applying Natural Law.

When the day arrives that gay, interracial, polygamous and pedophilc marriage is not uncommon, we can reasonably expect, (with the Modern mantra of equality for all, where “equality for all” applies to humans and nonhumans alike), Gentle Reader, that zoophile marriage will become a reality. 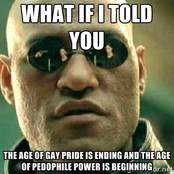