As a Biblical character, Lazarus is only explicitly mentioned in the fourth gospel, where his resurrection is correctly understood as a foreshadowing of the general resurrection of mankind. Although most people believe Lazarus’ resurrection anticipates Christ’s resurrection, this cannot be the intention of the author of the fourth gospel, as all stories emphasize “belief” and the story of Lazarus can be omitted and not affect the belief in Christ's miracles.

Lazarus was interned for four days [11:17, 39], and according to popular understanding, the soul remains near the body for three days, and arrives in the next world on the fourth day, hence, there was no hope of Lazarus being revived.  Christ was in the tomb three  days, hence Christ’s resurrection was plausible, whereas, Lazarus’ resurrection was impossible, that is, it depended upon an act of God.

Martha, although not a Christian, expects the resurrection of the dead on the “last day”.

The inhabitants of Bethany and many prominent people from Jerusalem knew that Lazarus had died. Therefore, no one at that time could deny that Lazarus was dead and long buried. Therefore, by the fact of Lazarus’ resurrection, Christ was shown to be a prophet of God.

Now when John had heard in the prison the works of Christ, he sent two of his disciples, And said unto him, “Art thou he that should come, or do we look for another?”

Luke repeats [7:19-20] the account of John’s two disciples as found in Matthew.

According to two gospel accounts, John the Baptist was uncertain if Jesus was the one to come, which we understand as meaning the coming of the Messiah.

Christ was crucified on the eve of the Sabbath and resurrected the day following the Sabbath. The fourth gospel is clear that this resurrection transpired while it was night, as Mary Magdalene went to the tomb while it was still dark [20:1]. Therefore, the resurrection could have occurred at anytime on the third day from the end of the Sabbath at sunset to sunrise. Hence, Christ was in the tomb for as little as twelve hours- from the start of the Sabbath, to the end of the Sabbath [from sunset to sunset] - or as long as thirty two hours [from the start of the Sabbath, through the end of the Sabbath, up to daybreak following the Sabbath].
​
Therefore, according to popular wisdom, Christ’s soul was in the vicinity of his body, so his resurrection can be understood as less miraculous, or more believable, than Lazarus’ resurrection.
We do not deny that Christ was in the tomb for three days, although our suggested maximum time for burial is around 32 hours, which is much less time, in hours, than three whole days. The Gentle Reader may recall that certain modern protestants have concluded that the ancient churches did not understand that three days could include a partial day [the first day], an entire second day, and another partial day [the third day]. As these times do not equal 72 hours (24 hours per day × 3 days=72 hours), the ancient churches are thought by certain modern protestants to be in error regarding the days of the crucifixion and resurrection.

As a society, we are a product of our knowledge, we know there is a number that is not a number, zero. For example, on a Friday, we would say that an event scheduled for Saturday is happening tomorrow, or one day away, as we consider today as a “zero” day; and an event on Sunday would be two days away, once again, not including today, day “zero”.

Finally,  in typical everyday conversations few people would suggest that an event would be required to be 24 hours away to be correctly considered a day; for example, speaking at 11pm about an upcoming 9am meeting would be described as the next day. Normal speakers ignore the fact that there are 24 hours in a day and that only ten hours will pass from discussing the future event at 11pm to its scheduled time at 9am, yet no one would accuse the speaker of being ignorant by his referring to the “next day”.
​
Among other things, the gospel account displays an ignorance of zero. The day before the Sabbath is understood as a day, as an entire day, even though burial occurred a few hours, by our modern reckoning, before the start of the next day. Regardless of the time of the resurrection following the Sabbath, that day would also be considered an entire day;  the third day in the tomb. Therefore, certain modern protestants are creating unnecessary doubt regarding the traditional account of the resurrection by attempting to apply mathematical certitude when nothing of the kind is required nor is this exactitude found in conversations.

8. His disciples say unto him, “Master, the Jews of late sought to stone thee; and goest thou thither again?”

9. Jesus answered, “Are there not twelve hours in the day? If any man walk in the day, he stumbleth not, because he seeth the light of this world.

10. But if a man walk in the night, he stumbleth, because there is no light in him.”

The Gentle Reader has no reason to question any aspect of this quotation,  either the factual information or the likelihood of tripping in the dark. Yet, the Gentle Researcher may wonder why Jesus would say that there are twelve hours in day; it seems as if the disciples were not privileged to this information.
The conventional depictions of the Jesus’ resurrection invariably are associated with a cave, yet, a cave [Strong's G4693, spelaion] is only explicitly mentioned in the account of Lazarus’ resurrection [11:38]. Jesus is placed in a grave, tomb or sepulchre [Strong’s G3419, mnemeion] and as G3429 cannot be presumed to be a cave in all instances, the conclusion is that Jesus’ grave is thought to be a cave either due to the association with Lazarus’ resurrection or the pre Biblical tradition of being interned in a cave. 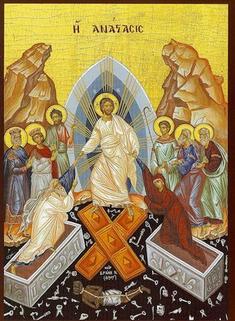 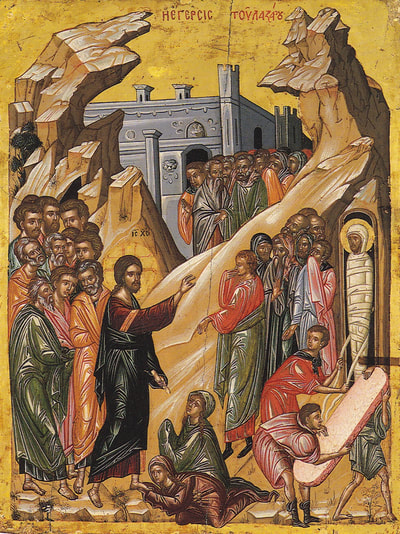 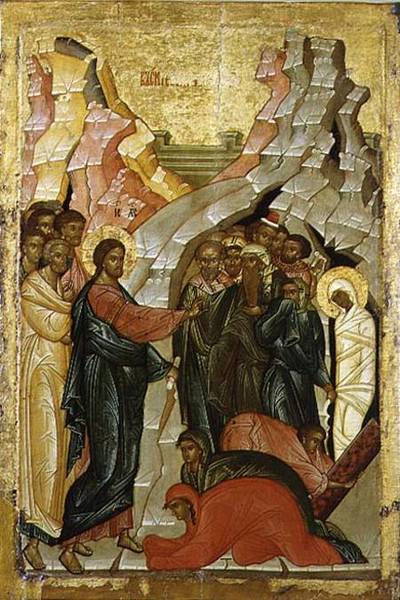 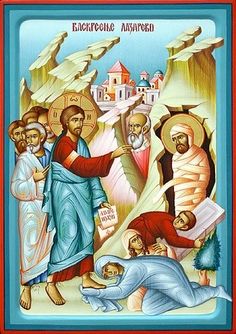 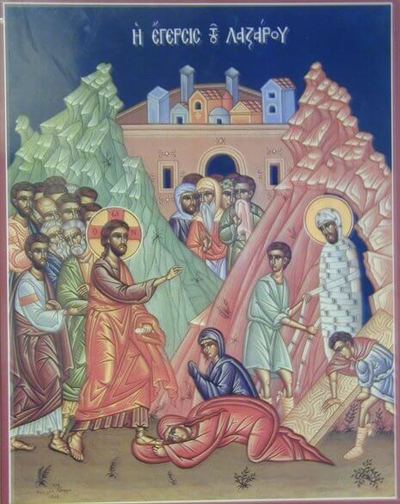 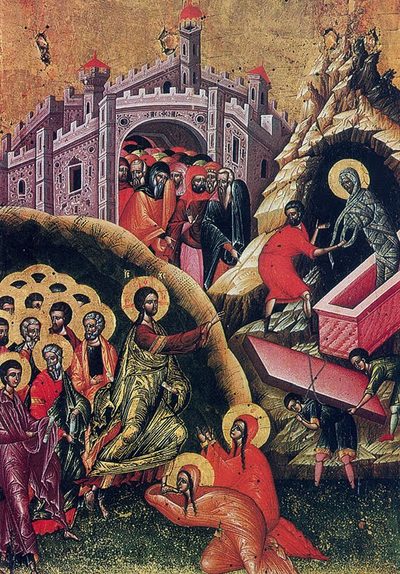 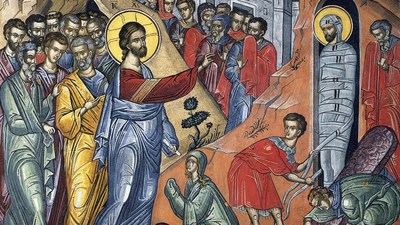 The pre Biblical tradition of Jesus’ tomb as a cave is evidenced by old icons, however, Renaissance paintings often depict Jesus rising from a horizontal grave [vide].

Our conclusion from the previous confusing facts is that an oral tradition of Jesus’ resurrection existed in the ancient church and the evidence for this conclusion is found depicted on the oldest icons. When the crucifixion story was finally written, “mnemeion” was used as the oral tradition expanded and clarified the exact type of grave. However, when these written accounts were interpreted in the western church without the oral tradition, Renaissance painters depicted Jesus’ resurrection from a horizontal grave. These painting are evidence, firstly, of an older oral tradition independent of the text and, secondly,  when Christianity was slowly introduced into western Europe piecemeal, a reasonable conclusion is that it was fully developed elsewhere.  Later, when the oral tradition became available in the western church, paintings were produced associating Jesus’ resurrection from a cave.
From Matthew’ account [chapter 28], it is uncertain if the tomb was a cave. However, the accounts in Mark [16:5], Luke [24:3], and the fourth gospel have the women and disciples entering the grave, indicating an entrance to a cave. A reasonable conclusion is that the renaissance painters did not have access to these stories that clearly indicate either a cave or vertical monument. 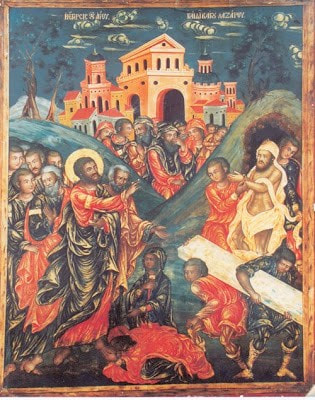 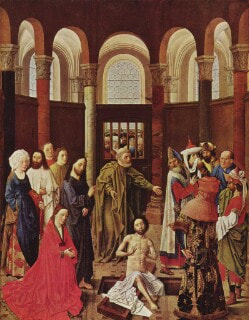 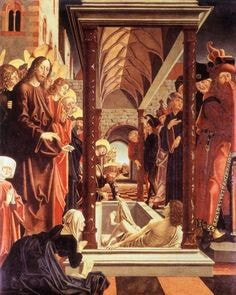 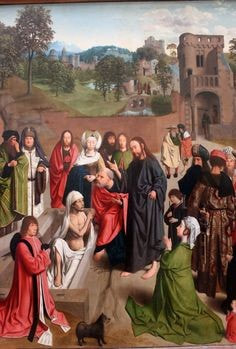 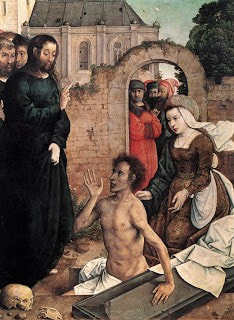 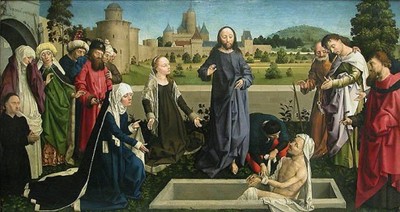 From the above images, there is a western tradition of Jesus wearing black garments in the 15th and 16th century. Wth nothing to guide them but there imagination, some artists placed Lazarus in a mausoleum.
We are suspicious of those who claim there is no God, as this statement would seem to require a supernatural revelation.

We are cautious of those who claim the resurrection is an impossibility, for such a claim requires knowing what is possible.

We are skeptical of those special individuals who unequivocally state, without any doubt, there is no God and there is no resurrection.

We are aware that redactors are a product of their time, inserting unobtrusive anachronisms into narratives that are not completely understood and fully appreciated by the careless reader. 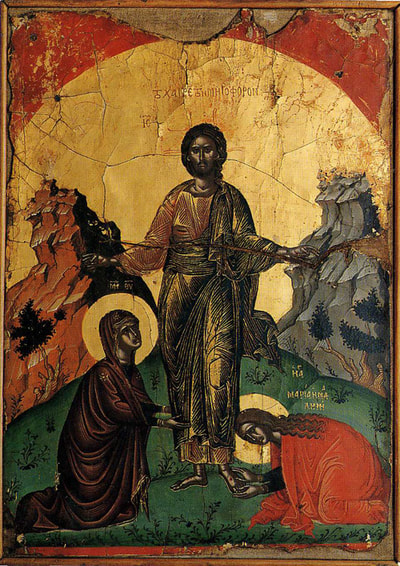 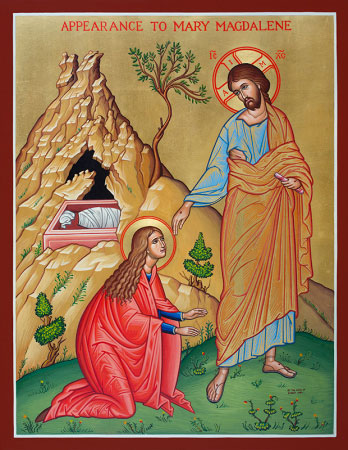 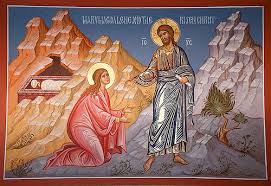