I read with great interest an article on Christianity and gay marriage. (Vide). I would like to image that many people in the media, Mr. Linker included, visit my website for my insightful writing. Unfortunately, I can not image this scenario, but I digress. 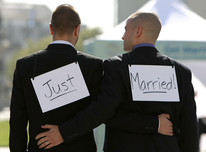