"Easy livin' and I've been forgiven ..."
-Demons and Wizards
​
Potential Apprentice Osif is desirous of studying under a Master of the Occult Arts and Sciences and, until that long hoped for opportunity presents itself, he will be apprenticing under Yours Truly.
Plato taught, or desired that the reader believe, that Socrates earnestly searched for the nature of justice throughout his life. Although Socrates was unable to find justice in Nature, he discovered it in the “city in speech”. This revelation of justice in the imagined city is an example of Plato’ caution; he is as forward as he can be regarding the man made concept of justice and the absolute rule of the wise. As justice is not found in Nature, justice can, and will, be assigned almost any value and subject to any definition by various individuals.

While Socrates wasted our time throughout the Republic seeking justice, we will spare the Gentle Reader a pointless exercise in futility and omit searching Nature for a creature called “forgiveness”, and we will rely on the assumption that it is a man-made construct. Therefore, it is possible that “forgiveness” may not touch upon reality.

When “Thy sins are forgiven” is translated literally,“Thy missing the marks are sent away,” it seems like a poor attempt at the esoteric writing technique of technical jargon. As Fred astutely noted, difficulties lurk behind every word of the Greek New Testament.
​
We may say that the “sending away” of sins is active, not passive, that is, the Roman, if not the Greek, priests send away or remit sins; it is an act of the will. The protestants assume their sins are sent away by either their belief in their salvation or the power of Christ; this assumption is not certain. The opinion that the theology of the Roman Church is fundamentally flawed cannot be the result of an attempt to understand the Roman Church on its own terms, that is, without presumptions, the teaching of the Roman Church may be found to be internally consistent.

After many centuries of development, we would be surprised if the Roman and Greek theological teachings were not consistent with their respective traditions.  Therefore, the fundamental issue for the Gentle Researcher is to  either accept the claim that Christian revelation is ongoing, per the Roman Church, or that there is no further revelation of Christian dogma, per the Greek Church. If the Gentle Reader concludes that neither ancient church offers either a legitimate or a reasoned theology, he must conclude that Protestantism is the correct teaching of Christianity, and we may say that the Gentle Reader would not be alone in his assessment.

On at least one occasion, Master hinted that there is a single and fundamental issue at the core of protestant beliefs. In the spirit of Modernism, this potential Apprentice will forgo prudence and proclaim what Master has cautiously hidden in corners.

Let us digress and state that capitalism will thrive because not every consumer needs be informed about every aspect of a product or service; availability and a stated price are the only necessities. Consumers may be very knowledgeable or profoundly ignorant of economics and economic theory, and anywhere in between, and the market will continue to operate. Therefore, there is a connection between individualism and capitalism. The  owners of a hamburger stand are indifferent if their customers are knowledgeable and have rational expectations, or whether their customers are mediocre and have irrational expectations.

The  modern claim that everyone can correctly interpret scripture is an innovation based on the presumption that all readers are rational, possess identical maturity, and are intellectually capable of understanding the written word.  Upon reflection, these presumptions regarding the ability of the typical reader or average person are without merit.  However, the claim that all believers are “forgiven” and “saved”, and as result of their salvation,  they are “saints” and “prophets” cannot be verified, otherwise said, these claims cannot be refuted intellectually, only historically. The result of modern Christianity is that the mediocre and decadent believers know the “truth” about the most important matter: the “salvation” of their “immortal souls”.  Saint Paul noted that the elect will judge angels (“Know ye not that we shall judge angels? how much more things that pertain to this life.”) and the typical protestant “believes” that they are “forgiven”, that they are “saved”, that they are “saints”, that they are the “elect”, and that they will judge angels. 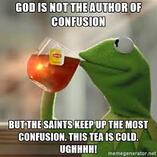 We recall that potential Apprentice Osif recently offered, and I greedily accepted, a plastic bag (in Hauten, a “plastic baggie”) filled with what I assumed were homemade sugar cookies. Interestingly, these cookies left Yours Truly with an intense feeling of euphoria that remained for many hours. Therefore-
​