This is the second Biblical passage I am in agreement without any qualifications.

As the Gentle Reader may suspect, anytime I acknowledge the validity of a Biblical verse, things are not as they appear.

We look at the text in its entirety, “The fool says there is no God.”, and proceed to the only conclusion.

A person who says there is no god is an atheist. They state that God does not exist. Agnostics know that there is no evidence for God, but he could exist. Agnostics leave the the possibility for God, but Atheists know God does not exist. How and where Atheists have gained their knowledge of  No God is on par with people knowing that God exists.  Both parties, Atheists and God Believers, have searched the mind and searched the heavens and they have come to opposite conclusions. How is this possible?

To state that there is no God is foolish, but why? To state with certainty that one knows the Eiffel Tower exists, but to acknowledge that one hasn’t visited Paris, demonstrates the common, and incorrect, way of speaking.  One can research the history of the Eiffel Tower from various sources and reach the reasonable conclusion that it exists in France to this day. Until one knows a fact, rather that suspecting and relying on outside sources, it is not proper to say that one knows anything that one does not know. If we speak so inaccurately about mundane things where we do not have any direct knowledge, it seems unlikely or improbable that we can reach any conclusion about the existence of God.

Strictly speaking, for anyone to say there is no God would mean that they have gone to all points of existence in the Cosmos and not found God.  Ideally, they would be in all points of creation simultaneously, just in case that God moved to another location during their search.

Only a fool would say that there is no God. The Bible and I agree.  Esoterically, this Biblical passage acknowledges that Atheists are foolish in their thinking (“in their heart”) and reasoning.
​ 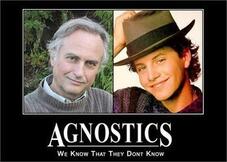