An Attempt to Interpret

I use Astrolabe to create typical natal charts and Mastering the Zodiac for sideral charts. 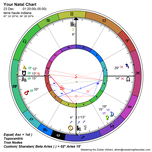 Similar to Tarot cards, I have one or two ideas that describe the signs and planets.  I do not use the Modern Planets in my natal charts.
The rising sign is Libra so relationships and partnerships are how our subject sees the world and interacts with it. The subject will find connections that others do not understand. Libra is an air sign and we expect the subject to enjoy learning. Jupiter in Libra means our subject is quick to make acquaintances. Unfortunately for our subject, Mars is also in Libra and could represent problems maintaining relationships.  We expect the subject to have difficulty with intimate relationships and to remain unmarried.

Mercury is the ruler of Virgo (earth) and Gemini (air). Gemini's are the used car salesmen of the zodiac and Virgo's have lists for their lists.  With Mercury in Capricorn, we would expect our subject to be a writer and these writings clarify, rather than obscure, the topic. The subject is on the cusp with Sagittarius and, therefore, unable to successfully relate a joke.

Saturn in Aries. The subject will be conflicted with how he sees himself.  Where Aries is outgoing and fiery, the darker nature of Saturn can not be overcome indefinitely.  We would expect the subject to have swings of euphoria (Aries and Sagittarius influence) and depression (Saturn influence).

The most striking aspect of this chart is the pairing of planets in signs.  Jupiter and Mars in Libra. The Sun and Mercury in Capricorn and Venus and the Moon in Aquarius.  We expect the subject to be rather shallow or one dimensional as the signs of Libra, Capricorn and Aquarius consist of two air signs and two Saturn influenced signs.  The subject would not have a wide range of interests and nothing beyond what the subject sees as practical.

With a total of four decans ruled by Saturn, the subject can see the world as limiting, dismal and possibly understand the Universe itself as flawed.  Three decans are ruled by Mercury and we expect the subject to communicate vocally. Due to the overwhelming influence of Saturn and Mercury, the subject might be viewed as distant, aloof, cordial, and controlling. The Sun in Capricorn influences the subject to work outside the home.  Capricorns are the managers of the Zodiac and we would expect the subject to eventually have a position of authority, after slowly working up the chain of command. With the influence of Saturn, any attempt, whether relationships or jobs, will be met with an uncertain start that can only become better with time.

We can speculate that the subject has above average intelligence with three decans ruled by Mercury and the rising sign of Libra.

We do not expect this individual to be successful by society's standards.  The natal chart, taken has a whole, indicates the subject to not able to successfully withstand the endless cycle of euphoria and depression which restricts job advancement and relationships.