According to accepted history, in May 1182 there was a massacre of Catholics in Constantinople.  To the best of my knowledge, this is only time that the Orthodox turned on Roman Catholics. The first siege last from July 11 to August 1, 1203. The city fell to the Crusaders on April 12, 1204. The city was recaptured  from the Latins on July 25, 1261.

The city was founded in 330 as the capital of the eastern Roman Empire. The city, at the heart of the empire, was secure from any external threat. The fall of the city in 1204 showed the need of protecting walls. We can conclude that the famous walls were constructed after 1261.

Before the fall of the city in 1453, the residents saw a light leave Hagia Sophia. Interestingly, Josephus wrote that the Jews saw the Spirit of God leave the Jewish Temple in the alleged year 70. The Christians and Jews took this as a sign that their respective cities would fall to the enemy.
​
The Jewish priests were slaughtered during the sacrifices by the Romans in the Temple.
The Christian priest was killed during the Divine Liturgy by the conquering Moslems in Hagia Sophia.

Jerusalem means "city of peace". This would be an appropriate name for a walled city that could not be taken in battle.

Therefore, the fall of the Jerusalem is the fall of Constantinople.  The implication is that Judaism is recent and not several millennium old.
​

The following dates are from the Oxford English Dictionary.  The OED has every word, with every definition, that has ever been used in the English language.
​
The seven words before the sacking of Constantinople are Cherub, Sabbath, Hebrew (person), Israel, Zion, Rabbi and Synagogue.  Of these words only Cherub is not a word commonly associated with the religion of the Jews. However, two Cherubs are placed over the Ark of the Covenant and the Ark is the oldest relic associated with history of Judaism, so it is not inappropriate to find Cherub on the list. Although there has been no attempt to be scientific in this listing (the words were chosen from a thesaurus ), it is odd that Cherub is the oldest word on the list.

The nine words dated from between 1204 and 1453 are Hebrew (language), Jew, Holy Land, Circumcision (as Hebrew), Messiah, Babylon, Seraphim, Israelite and Paschal. The remaining 22 words date from after 1453. As always, the gentle reader will come to their own conclusion. 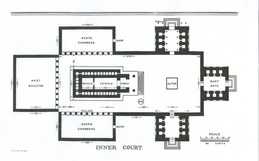 King Solomons's Temple and environs.
NB- From this image, it could easily be mistaken for a floor plan of a western Roman Catholic church.
Click on image for a larger version.

1584   W. Allen True Def. Eng. Catholiques viii. 166
How the Heresie of the Arrians..discharged itself at length into Machometisme.
1597   T. Beard Theatre Gods Iudgements i. xxvii. 155
Their detestable Mahumetisme and Turkish religion.

1602   W. Watson Decacordon Ten Quodlibeticall Questions 301
This is right Mahumetisme, and tendeth to the ouerthrow of the Gospel and church Catholike.
1613   S. Purchas Pilgrimage 311
These (they say) are friends to the Islams, that is, Catholike, or right-beleeving Musulmans.
1613a   E. Brerewood Enq. Lang. & Relig. (1614) x. 68
In Afrique, all the Regions in a maner, that Christian religion had gained from Idolatry, Mahumetanisme hath regained from Christianitie.
1614   J. Selden Titles of Honor 105
An African expressly affirms that in Mahumedisme were anciently lxxii. Sects, and now but two.
1615   G. Sandys Relation of Journey 59
Mahometisme had not yet vtterly extinguished all good literature.
1625   tr. Surrender of Lantore in S. Purchas Pilgrimes I. v. xiv. 703
Our Religion of Islam doth not agree with the Christian Religion.
1632   W. Lithgow Totall Disc. Trav. iv. 144
They were..initiated in Mahometanisme.
1687   A. Lovell tr. J. de Thévenot Trav. into Levant i. e j b ,
That Sect..was in Mahometanism the most Puritanical of all the Sects of the East.

1708   S. Ockley Conquest of Syria I. 253
See you do not renounce Islâm.
1717   J. Chappelow Right Way to be Rich (ed. 2) 164
Reformation, a thing far more frightful..than Popery, Slavery, Mahometism, or the Devil himself.
1756   tr. J. G. Keyssler Trav. I. 83
Even Mahometanism was preferable to Calvinism.
1788   F. Gladwin Hist. Hindostan 49
Mohammedism first appeared in Cashmeer about the commencement of the eighth century of the Hegira.
1792   J. Clarkson Diary 3 Nov. in Sierra Leone Stud. (1927) 8 95
Visited by..a Mandingo Maraboo (priest) and his family of Port Logo. This nation is strict in Mahometanism as the Turks themselves.
1793   J. Trapp tr. A. M. Rochon Voy. Madagascar 48
It is surprising that Mahometism should not have made more progress in this island.
1797   J. Dallaway Constantinople 128
​The more ingenious are instructed in islàm, and the sciences it deems lawful.